Offshore pipelines laid on the seabed are exposed to hydrodynamic and cyclic operational
loading. As a result, they may experience on-bottom instabilities, walking and lateral
buckling. Finite element simulations are required at different stages of the pipeline design to
check the different loading cases. Pipeline design depends on accurately modelling axial and
lateral soil resistances.

Conventional pipeline design practice is to model the interaction between the pipe and the
seabed with simple “spring-slider” elements at intervals along the pipe, as finite element
methods with elaborated contact and interface elements between the pipeline and the
foundation do not allow for comprehensive modeling of long pipeline systems with current
computational power (Tian et al, 2008). These “spring-slider” elements provide a bi-linear,
linear-elastic, perfectly plastic response in the axial and lateral directions. The limiting axial
and lateral forces are based on empirical friction models, which relate axial and lateral
resistance to the vertical soil reaction by using a “friction factor”. In the vertical direction, a
non-linear elastic load embedment response derived from bearing capacity theory is usually
assumed, the pipeline being treated as a surface strip foundation of width equal to the chord
length of pipe-soil contact at the assumed embedment.

These simple models can be adequate for sand but are too simplistic for clay, especially soft clay. Due to the slow rate of consolidation of clay, a total stress approach using an undrained
shear strength su should be employed. In this case, the axial and lateral resistances do not directly depend on the vertical soil reaction but on the contact area between the pipe and the
seabed. As a result, an accurate prediction of the pipeline embedment, which can be large in
very soft cay, becomes of primary importance.

These simple models were improved to better predict pipeline embedment and axial and
lateral resistances and were implemented in a Finite Element software program for pipeline
analysis to better simulate the pipe-soil interaction of surface laid pipelines in soft clay and to
more accurately simulate full routes. The new features are briefly explained in this paper. A
more recent pipe-soil vertical reaction law that models plastic unloading is built into the
program. It considers lay and dynamic installation effects to compute a more representative
pipeline embedment. Axial and lateral resistance is now linked to pipeline embedment.
Finally, peak-residual axial and lateral reaction laws are implemented.

Solutions for estimating the resistance profile have been provided by Murff et al. (1989),
Aubeny et al. (2005) and Randolph & White (2008). The pipeline penetration z may be
estimated from the conventional bearing capacity equation, modified for the curved shape of
a pipeline:

where V is the vertical load per unit length, D is the pipeline diameter, su the undrained shear
strength at the pipeline invert and As the nominal submerged area of the pipeline crosssection.
For design, the bearing capacity factor Nc can be estimated using rounded values of
the power law coefficients a and b, for example a = 6 and b = 0.25 (Randolph & White,
2008). Buoyancy has an influence in extremely soft soil conditions. This is captured by the
buoyancy factor Nb. The factor fb should be taken equal to 1.5 because of heave (Randolph
& White, 2008).

The accuracy of this calculation approach, of the order of +/- 10%, is sufficient given the
other uncertainties such as the installation effects, which influence the vertical load V (see
below) (White & Randolph, 2007).

Installation effects
During installation of a pipeline, the vertical and horizontal motion of the lay barge and the
load concentration at pipe touch-down will yield larger penetration than calculated based on
the pipe submerged unit weight. The load concentration can be taken into account by
multiplying the pipe weight by an amplification factor flay as proposed by Bruton (2006). In
order to take into account the effect of pipe motion during installation, a partially remoulded
shear strength can be used to compute the pipe embedment, as proposed by Dendani &
Jaeck (2007), instead of the intact strength. These features combined with the vertical
reaction law described above allow predicting a more realistic pipeline embedment, which is
of primary importance to compute a realistic axial and lateral resistance.

Plastic unloading
A non-linear elastic load embedment response is conventionally assumed for the vertical soil
spring. However, it is essential to model a spring as behaving plastically to avoid predicting
an unrealistic rebound when the pipe is unloaded. In practice, a pipe is often overpenetrated,
meaning that its operating weight is lower than the maximum vertical force that
had been applied to it. In effect, it has been unloaded. It is important to model a spring with
plastic behaviour and “memory” to calculate the appropriate vertical soil stiffness. The
behaviour of an over-penetrated pipe can be described by the stiff unload-reload line. When
reloaded to its normally-penetrated range, the pipe’s behaviour can be described as following
the virgin load embedment curve. This is illustrated in the example below and in Figure 1.
Let us first consider an elastic spring. During installation, the pipe moves to A1 due to load
concentration and then rebounds to A2, to a vertical displacement corresponding to its
submerged empty weight. During the hydrotest, the vertical force increases and the pipe
moves to B. During operational conditions, if the content is lighter than water, the pipe is
unloaded to point C. The pipe embedment and the tangent stiffness at this point are not
realistic. In the case of an elasto-plastic spring, the pipe goes to A1 during installation and
then to A2* following an unload-reload line. During the hydrotest, the vertical force increases
to B* along the unload-reload line. Finally, the pipe is unloaded to C*. At this point, the
pipeline embedment and the tangent stiffness are more realistic. An accurate pipe
embedment is especially important when it is coupled to axial and lateral resistance (see
next Section). 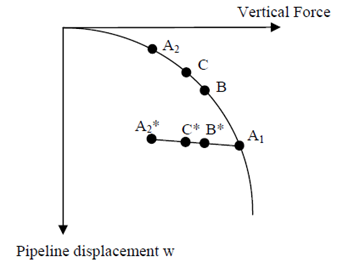 where αsu is the unit interface shear resistance, Ac is the area of contact between the pipe
and the seabed which is a function of the pipe embedment z, μ is a “friction factor” in the
range 0.2-0.8 (Randolph & White, 2007) and λ a coefficient typically in the range 0.5-2.
The axial and lateral resistances have been linked to the pipeline embedment so that they
are automatically calculated and can change during the analysis.

Tri-linear axial and lateral model
Models of the simple bi-linear frictional axial and lateral springs were improved so they can
use peak and residual resistances to model the softening of the axial and lateral response
often observed in clay. As explained earlier, pipelines are often over-penetrated in practice.
When this occurs in soft clay, lateral breakout resistance Fpl, is high and drops sharply when
suction at the rear face of the pipe is lost, then decreases further to a residual value Frl as
the pipe rises to a shallower embedment. When the residual resistance is reached, the
lateral resistance may increase again because a soil berm forms in front of the pipe (see
Figure 2). The axial resistance may experience strain softening as well due to suction
release and clay remoulding.

Conclusions
Simple soil models conventionally used in pipeline design practice have been improved and
implemented in a Finite Element software program for pipeline analysis. There are several
improvements. A more recent pipe-soil vertical reaction law that models plastic unloading is
built into the program. It considers lay and dynamic installation effects to compute a more
representative pipeline embedment. Axial and lateral resistance is now linked to pipeline
embedment. Finally, peak-residual axial and lateral reaction laws have been implemented.
The new features are basic but important first steps towards more accurate full route
simulations, especially those in soft clay.