Pipeline is a transportation of goods through a pipe. For underwater pipeline the most common goods is oil and gas. Generally pipeline is welding using 5G position with two kind welding techniques. First one is downhill, the most common use for pipeline. The welding start from above the pipe and go through the bottom of the pipe. Second is uphill, the opposite way of downhill. Pipeline welding using downhill technique because this technique is faster than uphill. But for toughness, uphill technique is still better than downhill. Celluloid is the most common welding consumable that use for welding in pipeline. For welding technique is depend on client requirement, but nowadays welding in pipeline is using MIG or for manual is GTAW.

The pipeline have some several parts, there are:

Installing pipeline underwater is called pipe laying. There are three types of laying, S-lay, J-lay, and nowadays there is a reeling installation. The different from three of them is the shape of the pipe when went from a barge to seabed. S-lay laying pipe usually use for small size of pipe, when J-lay and reeling is for big size installation.

The example of conventional pipeline method is on US EPCI company’s barge. Figure 1 is a flow chart of pipeline conventional method. 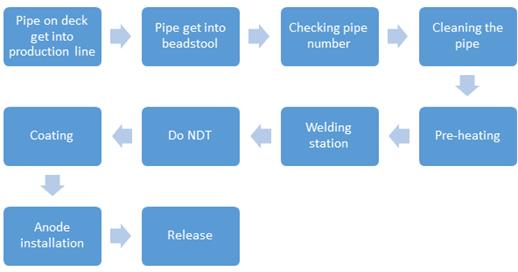 The barge will bring the pipe to the construction site, another barge also bring it into the site. In location site the barge will put down the anchor. Using a help from tugboat the barge need to get a good position of an anchor to hold the barge getting pulled by pipeline when the pipeline start to release from the barge. When it settle the barge start their construction line.

First the pipe from deck or barge will go into construction line. The pipe will went through beadstall. In beadstall, the pipe will be check the code, cleaning the pipe, and also some preheating is applied into the pipe. If there is something wrong with the pipe code or rejected the pipe will go to quarantine place. After preheating, the pipe will go to the station. Station is a place where the pipe start to weld, NDT test, coating, and in the end is release it into the seabed. How many station on the ship is depends on client demand, but usually there is 9 stations on the ship. First station is for root welding station. Welding technique use in project is depend on the client demand. When it finish it will go to other station to do another welding layer, and so on in other station until finishing the capping weld. After finishing the welding, NDT test will do to check the welding result. The most common NDT test is UT or nowadays is AUT. But sometimes radiography test also use to inspect the welding. If there is a problem, the construction line will stop and welder will be call to repair the welding. If it can't be repair, the pipeline will be cut off and replace with a new pipe. After the NDT station pipeline will go to the next station which is a coating station. In this station they will applied a coating for pipeline joint, a pipeline coating already installed in land. The coating that use for joint is Heat Shrink Sleeves (HSS) coating. After finishing the coating, anode installation will be done, depends on client demand. Later the pipe will be release into the sea. Pipe will go from the barge trough a stinger and later go into the seabed. The pipeline will leave the barge and went through the seabed create an "S" shape. That pipe laying is called S-lay pipe.