For many decades the only way we could extract natural gas was to drill a well straight down into the ground. However, in many instances, this is not possible, not economically feasible, or simply not efficient. Technological advances now allow us to efficiently deviate from 'straight line' drilling, and steer the drilling equipment to reach a point that is not directly underneath the point of entry. While what is known as 'slant drilling', where the well is drilled at an angle instead of directly vertical, has been around for years, new technology is allowing for the drilling of tightly curved well holes, and even wells that can take a 90 degree turn underground. 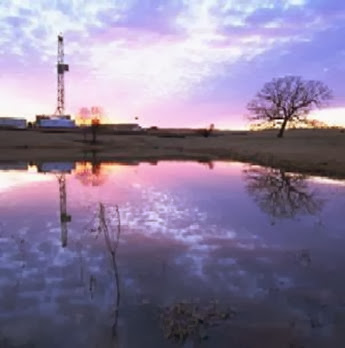 Directional drilling is the process of drilling a curved well, in order to reach a target that is not directly beneath the drill site. This is useful in many circumstances where the area above the targeted deposit is inaccessible. For example, to reach reservoirs that exist under shallow lakes, protected areas, railroads, or any other area on which the rig cannot be set up, directional drilling is employed. It is also useful for long, thin reservoirs. These types of reservoirs are not efficiently mined with a vertical completion. However, horizontal entry into the reservoir allows it to be drained more efficiently. Directional drilling is especially useful for offshore locations. The cost of offshore drilling rigs can make it uneconomical to drill a single well. With directional drilling, the offshore rig can gain access to deposits that are not directly beneath the rig, meaning that 20 or more wells can be drilled from a single rig, making it much more cost effective to drill offshore.

A number of advances were crucial to the progression of horizontal drilling. Measurement-while-drilling technology (or 'borehole telemetry') has allowed engineers and geologists to gain up-to-the-minute subsurface information, even while the well is being drilled. This avoids some of the complications of normal logging practices, and greatly increases the drilling engineer's knowledge of the well characteristics. Steerable downhole motor assemblies have also allowed for advances in horizontal drilling. While conventional drilling occasionally employs the use of downhole motors just above the drill bit to penetrate hard formations, steerable drilling motors allow the actual path of the well to be controlled while drilling.

There are three main types of horizontal wells; short-radius, medium-radius, and long-radius. Short-radius wells typically have a curvature radius of 20 to 45 feet, being the 'sharpest turning' of the three types. These wells, which can be easily dug outwards from a previously drilled vertical well, are ideal for increasing the recovery of natural gas or oil from an already developed well. They can also be used to drill non-conventional formations, including coalbed methane and tight sand reservoirs.

Medium-radius wells typically have a curvature radius of 300 to 700 feet, with the horizontal portion of the well measuring up to 3,500 feet. These wells are useful when the drilling target is a long distance away from the drillsite, or where reservoirs are spaced apart underground. Multiple completions may be used to gain access to numerous deposits at the same time.

Long-radius wells typically have a curvature radius of 1,000 to 4,500 feet, and can extend a great distance horizontally. These wells are typically used to reach deposits offshore, where it is economical to drill outwards from a single platform to reach reservoirs inaccessible with vertical drilling.

Horizontal drilling is an important innovation that will likely find countless new applications as the technology is developed. With increasing demand for natural gas, innovations like these will be invaluable to securing and bringing to surface these much needed hydrocarbons.