Pipeline pigs are devices that are placed inside the pipe and traverse the pipeline. While buildup in a pipeline can cause transmittal slows or even plugging of the pipeline, cracks or flaws in the line can be disastrous. A form of flow assurance for oil and gas pipelines and flowlines, pipeline pigging ensures the line is running smoothly.

The maintenance tool, pipeline pigs are introduced into the line via a pig trap, which includes a launcher and receiver. Without interrupting flow, the pig is then forced through it by product flow, or it can be towed by another device or cable. Usually cylindrical or spherical, pigs sweep the line by scraping the sides of the pipeline and pushing debris ahead. As the travel along the pipeline, there are a number functions the pig can perform, from clearing the line to inspecting the interior. 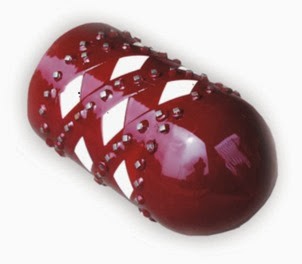 Although first used simply to clear the line, the purpose of pipeline pigging has evolved with the development of technologies. Utility pigs are inserted into the pipeline to remove unwanted materials, such as wax, from the line. Inline inspection pigs can also be used to examine the pipeline from the inside, and specialty pigs are used to plug the line or isolate certain areas of the line. Lastly, gel pigs are a liquid chemical pigging system. 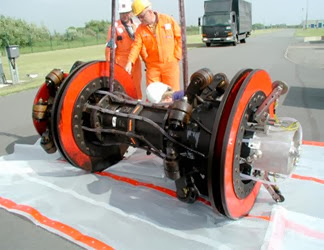 Specialty pigs, such as plugs, are used to isolate a section of the pipeline for maintenance work to be performed. The pig plug keeps the pipeline pressure in the line by stopping up the pipeline on either side of where the remedial work is being done.

A combination of gelled liquids, gel pigs can be used in conjunction with conventional pigs or by themselves. Pumped through the pipeline, there are a number of uses for gel pigs, including product separation, debris removal, hydrotesting, dewatering and condensate removal, as well as removing a stuck pig.

Pigging facilities and considerations should be incorporated into the pipeline system design. Basic pigging facilities require a device to launch the pig into the pipeline and a receiver system to retrieve the pig as shown in Fig. 3. The launcher barrel is typically made from a short segment of pipe that is one to two sizes larger than the main pipeline and is fitted with a transition fitting (eccentric reducer) and a special closure fitting on the end. The barrel is isolated from the pipeline with full-port gate or ball valves. A “kicker” line, a minimum of 25% capacity of the main line, is tied from the main pipeline to the barrel, approximately 1 1/2 to 2 pig lengths upstream of the transition reducer, to provide the fluid flow to “launch” the pig into the pipeline. The barrel is fitted with blowdown valves, vent valves, and pressure gauges on the top and drain valves on the bottom. The length of the barrel is determined by the length and number of pigs to be launched at any one time. Receivers have many of the same features. 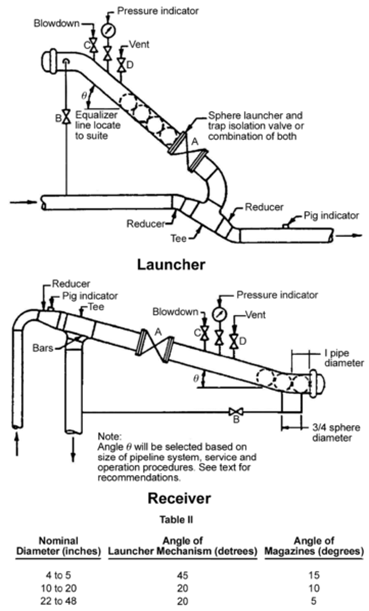 Pig runs of between 50 to 100 miles are normal, but pig runs exceeding 200 miles should be avoided as the pig may wear and get stuck in the line. Cleaning pigs may be constructed of steel body with polyurethane cups or discs and foam pigs with polyurethane wrapping, solid urethane disc, and steel body with metallic brushes. Drying pigs are usually low-density foam or multicup urethane. The intelligent pigs may be: