The induction bending process for large-diameter pipes is very popular technology. An important problem in the bending process is prediction and improvement of the bending quality. In this article, a thermo-elastic-plastic mechanical model is used to simulate induction bending of large-diameter pipes. The bending experiments of the API 5L X65 induction bend pipes were performed to clarify the deformation behavior of the pipes. The large deformation behaviors of these experiments were simulated by finite element method, using ADINA software. 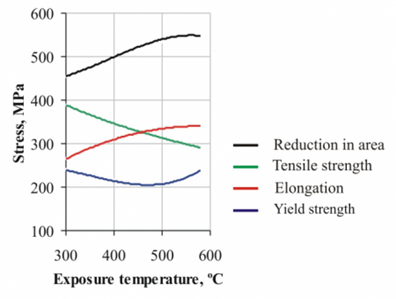 Triple D Bending has been bending pipe for 26 years and induction bending for seven years. Customer specifications and requirements for material properties are becoming increasingly stringent and the company is continually improving processes to meet these requirements. For some customer applications, ovality of the pipe bends is of major concern. For this reason Triple D Bending desired to have a method of predicting the ovality of completed bends in order to find ways to improve the ovality of the pipe bends.

Induction bending as a technique is relatively quick and cheap, but induction bending can produce unwanted changes in geometry such as wall thinning at the extrados, wall thickening and wrinkling at the intrados, and steep transitions in wall thickness between tangent and bend. These problems increase in severity as the bend radius is reduced. However, there are a lot of other problems, such as springback and cross-section ovality when bending thinwall pipe with a large diameter.

The fundamental tasks which had to be solved can be summarized as follows:

Line pipe for constructing oil and gas pipelines is made from steel, and in particular, either low-carbon steel or low-alloy steel. Low-carbon or low-alloy steels are suitable for line pipe materials and most other steel structures such as buildings or bridges because they provide a durable, strong material to withstand the service loads imposed on such structures. Other iron-based materials such as wrought iron and cast iron are either too low strength or too brittle to function well as structural materials.

Stainless or high-alloy steels are essential for special applications such as in high-temperature piping and pressure vessels or tool steels, but they are not suitable and cannot be made economically in the quantities needed for use in structures including pipelines. Only low-carbon steels or low-alloy steels offer the appropriate ranges of desirable properties (i.e., strength, toughness, ductility and weldability) that are required for structural applications.

The performance of steels depends on the properties associated with their microstructures. Each type of microstructure and product is developed to characteristic property ranges by specific processing routes that control and exploit microstructural changes. Carbon steels and low-alloy steels with ferrite-pearlite or ferrite-bainite microstructures are used extensively at elevated temperatures. Carbon steels are often used up to about 370ºC under continuous loading, but also have allowable stresses defined up to 540ºC. Effect of elevated-temperature exposure on the room-temperature tensile properties of normalized 0.17% C steel after exposure (without stress) to indicated temperature for 83,000 hours is shown in Figure 1.

The allowable design stresses for steels at elevated temperatures may be controlled by different mechanical properties, depending on the application and temperature exposure.

In designing components that are to be produced from low-alloy steels and to be exposed to temperatures up to 370ºC, the yield and ultimate strengths at the maximum service temperature can be used much as they would be used in the design of components for service at room temperature.

For the material properties, analysis at room and elevated temperatures were selected as the experimental methods – mechanical properties tests (tensile test) and mathematical approximation of statistical data. The results, tensile test at room temperature and other mechanical characteristics are presented in Table 1. 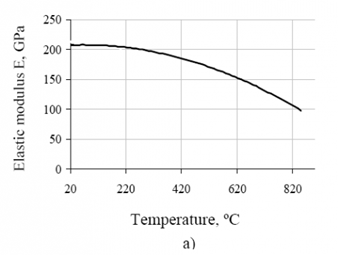 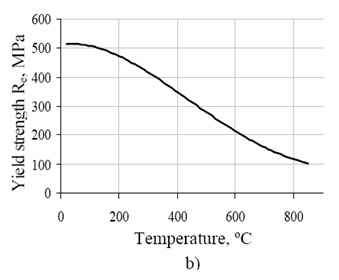 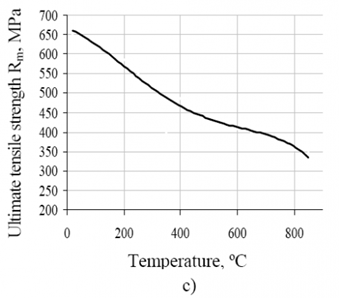 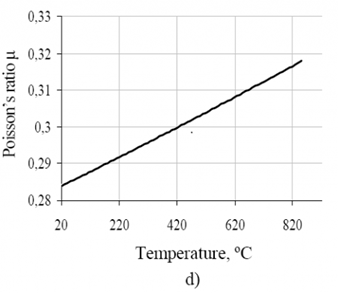 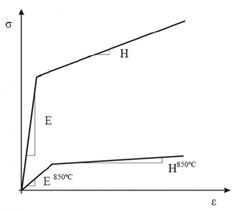 Computational Assumptions
The finite element method was used for modeling the process of induction bending (Figure 4). The computational model contains the following assumptions: 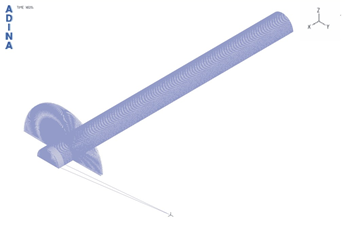 Necessary inputs for modeling of technological process of the induction bending of pipes:

The chosen results of the computational simulation are presented in Figure 5 and Figure 6. Ovalization of the pipe cross-section shall be limited in design to prevent section collapse. The pipe diameter changes are evaluated in two directions: first is in the radial direction, second is in the binormal direction. These changes of diameters are dependent on the angle of the bending arm (Figure 7). The pipe was 30-inch/762 mm - API 5L X65. The applied bending angle was taken from range 0 to 90 degrees. Bend radius was 4800 mm and wall thickness was 0.562 inch / 14.27 mm. 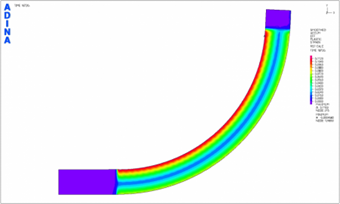 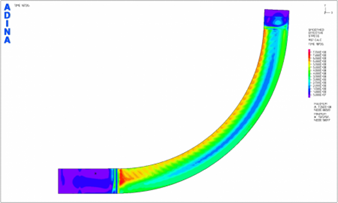 Conclusion
This article presents finite element analysis of the complicated technological problem. The results of the analysis provide information about shape (diameter) changes of the bending pipe. The computational process complicates temperature dependence of the material characteristics and the substitution of induction heating.

Induction heating is a physically complex action. Modeling of this process is not included in FEM software for such structural problems. For this reason it is necessary to substitute induction heating by contact between bodies with heat transfer. Using this substitution simplifies the whole FE model; on the other hand, this solution has the right accuracy.